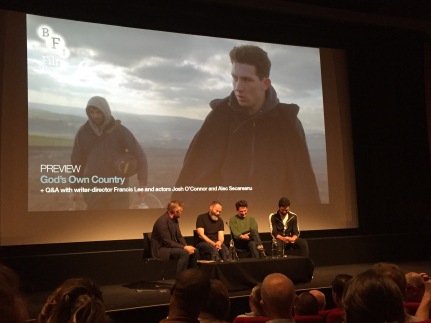 The British farming industry’s certainly going though a purple patch at the moment, although sadly only on film. There’s Clio Barnard’s forthcoming Dark River to look foward to and Hope Dickson Leach’s superb recent feature The Levelling (2017), which painted a bleak picture of making a living off the land in the face of disaster, and while God’s Own Country doesn’t plunge the same levels of despair, it doesn’t seek to play with nostalgia either.

Films and television can often use rural setting and landscape as a backdrop or a mirror. In Withnail and I (Bruce Robinson, 1987), it’s a place of slapstick, an arena in which to show off the titular characters’ inadequacies. You don’t really get a sense of the realities of farming life.

Programmes like Last of the Summer Wine (BBC, 1973-2010) and All Creatures Great and Small (BBC, 1978-1990) show great love for British countryside, but they’re gentle and sentimental. The League of Gentlemen (BBC, 1999-2002) and Flowers (Kudos/Channel 4, 2016) show the rural wyrd and the eerie. And while something like The Hanging Gale (BBC, 1995) depicts real-life harrowing events it’s addressing something specific. In this way God’s Own Country is more akin to Akenfield (Peter Hall, 1974) and On the Black Hill (Andrew Grieve, 1987), it presents the landscape and those who live off it on its own terms. I think Thomas Hardy would approve of this story.

While comparisons with Brokeback Mountain (Ang Lee, 2005) are to be expected – and Francis Lee seems happy to homage it with some shot framing and shirt sniffing – the sexuality of Johnny Saxby (Josh O’Connor) is presented as unremarkable reality and never really commented upon. The characters in this film have too much else to worry about. Johnny’s father, farmer, Martin Saxby (Ian Hart) is recovering from a stroke and unable to work the land, his virtual emasculation manifestly bitter. Johnny is running things single-handed but clearly struggling to cope, finding escape in alcohol and casual sex. A farm hand arrives in the form Romanian immigrant Gheorghe Ionescu (Alec Secareanu), “the only one to apply” according to Johnny’s nan, Derdrie (Gemma Jones), and quietly proves his worth in the face of unfriendly indifference from Martin and open racism from Johnny. The words “Paki” and “Gypo” are used in quick succession.

While Johnny is painted as hostile and uncaring, praise must go to both Lee and O’Connor as we never lose sight of such aggression clearly being a symptom of projected self-hatred, Johnny is dismissive of a childhood friend that’s gone to university. Indeed when a relationship starts to develop between Johnny and Gheorghe, you initially wonder what the gentle and intelligent Gheorghe sees in one so ignorant and spiteful. But like the lamb he nurses back to health and the cow he succors, Johnny too is in need to saving and as their love develops, Johnny mellows and improves relations with his own family.

As expected the film is littered with lingering landscape shots which awe and isolate in equal measure. There’s little sentimentality either, farming is shown to be isolating, relentless and dangerous. It’s an unloved industry but it’s one that so vital to the UK, and it now faces crippling uncertainty.

Johnny’s fall from grace (shagging a visiting student in the pub Gents), Gheorge’s abrupt departure and the romantic resolution may seem a little too tidy for such a film, but for a production shot through with beauty, rebirth and love it’s entirely in keeping.

At the film’s climax, where Johnny determines to run things his way, and Gheroghe has suggestions of new ways of working and diversifying, we do get a feeling of hope for the future. Yet this film was made before the Brexit vote and the hostility of some locals to Gheorghe and the unspoken realities of ending free movement (no Brit wanted this job in the first place) can not be resolved here.

This is a film that does not seeks to build walls, well, unless they’re dry stone ones. A superb full debut from Francis Lee.