Most TV and film productions are products of their time, less in terms of their technological and budgetary limitations, more that they reflect the society in which they were created. This is particularly true in both science fiction and  historical drama. Setting a story in the the future or the past (or on another planet altogether) gives producers an opportunity to push an altogether more critical line via allegory than they may otherwise be able to if setting the story in the here and now. Of course a past setting can also be used simply as  shorthand for atmosphere and expectation, most obviously by placing anything deemed ‘Gothic’ in the 18th and 19th centuries. Which brings us nicely on to Hammer.

By the 1970s Hammer was starting to lose its place in the horror market. In an attempt to compete with the contemporary urban horror of films such as Rosemary’s Baby (Roman Polanski, 1968) Christopher Lee’s Dracula was reborn in modern day London in Dracula AD 1972 (Alan Gibson, 1972) and The Satanic Rites of Dracula (Alan Gibson, 1973). Both films were critical failures and the presence of a traditionally caped and suited Dracula in 1970s London does little more than provide fertile ground for ridicule.

Pictured: Dracula hanging out with the Kids.

Yet their psychological thriller series of films, particular The Nanny (Seth Holt, 1965) shows that Hammer could provide effective contemporary stories when freed from the increasingly lazy trappings of their gothic stable.

The TV anthology series Hammer House of Horror (1980) was developed by returning Hammer board members Brian Lawrence and Roy Skeggs in a bid to revitalise the ailing company. It was part financed by Lew Grade’s ITC and scripts were overseen by outgoing Doctor Who Script Editor Anthony Read. The 13 hour long episodes explore a variety of horror scenarios in a contemporary setting. Like most anthology series the quality is variable but at their best they are some of the most effective horror stories produced for television.

I’ll return to this series in future posts but for the purposes of this piece I’ve focussed on two episodes that grabbed me the most, The House That Bled To Death and The Two Faces of Evil. 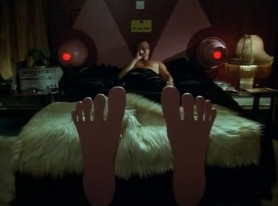 I’m sure as shit coming back for this one though.

The House That Bled To Death opens with an old man (George Tovey) making cocoa for him and his wife (Una Brandon-Jones). When she starts to choke on whatever he’s put in the drink, he takes an ornamental knife off the wall and hacks her to death with it. We never find out why but that’s not the focus of the story, and anyway, the unknown is always more terrifying.

Cut to present day and a struggling young family (Nicholas Ball, Rachel Davies,Emma Ridley) are moving into the house where the murder took place, it’s going for well below market rate because no one wants to live there. But they’re hard up so they’ll take the risk. After all, there’s no real danger is there? 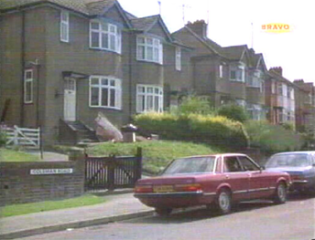 In High Wycombe everyone can hear you scream. They just don’t care.

As this is a Hammer production we all think we know the answer to that one. And while we’d not be exactly wrong, it wouldn’t be true to say we were right either. This is a tale that plays with expectation and whatever else I was expecting from this series, it wasn’t postmodernism.

The modern day urban horror that’s so ubiquitous now seems refreshing and unsettling in this pre Poltergeist (Tobe Hooper, 1982) world and before too long the daughter’s seeing blood coming from the walls, the cat dies brutally, there’s a severed hand in the fridge and mysteriously an ornamental knife keeps turning up…….

This all culminates in a children’s party where a pipe comes loose and sprays everybody liberally with blood. 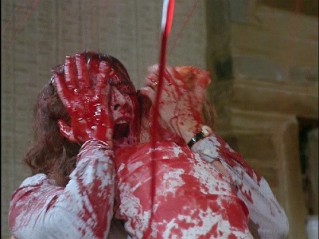 Literally every children’s birthday party ever.

The blood looks fake of course because blood in most 70s and early 80s horror productions looks fake but this time it’s different. This time is the blood is supposed to be fake. It turns out all the creepy goings on the house have been a massive hoax. Not the original murder of course but the house’s weird estate agent (Milton Johns) has written a book about it, and this is the mother (and father) of all publicity stunts with the family as paid accomplices. When we last see the family they’re living the life of riley in Spain. 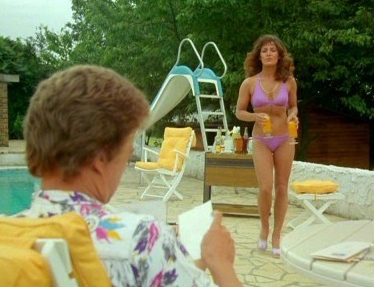 They get their comeuppance of course and there’s a strong suggestion that there was something evil in the house after all, but I find the final, smaller twist weak and problematic. All through this story the family had our sympathy, they were the victims, they were trying, they were poor and the viewer felt righteous in giving their sympathy. Once they’re revealed as deceitful and have taken the money and run (to Spain of all places, how terribly working class) our sympathies evaporate. They deceived their new neighbours, their new friends. And of course us. Were we ever so quick to judge those less fortunate than us and resent those that become more so? I think we all know the answer to that one too.

Things are rather more middle class and rural in The Two Faces of Evil.

Not to be confused with two The Face of Evils.

Here we meet a nice, middle class family (Anna Calder-Marshall, Gary Raymond, Paul Hawkins) off for a nice, middle class cottage holiday in nice, middle class rural England, so of course it’s chucking it down. Experienced TV scripting at work here as we quickly establish the couple are in love and both dote on their son. They have a good natured argument about whether to turn left or right at a junction. Of course anyone who’s actually been in this situation knows that disagreements with your spouse about driving directions on holiday are ‘less good natured argument’ and more ‘threats of imminent death/divorce’.

Look at these bastards. I hope something horrible happens to them.

As they drive off the mum notices something odd in an adjacent field.

Is that….an upturned tree? A really big wasps’ next? A-oh shit who the hell is that?!

They only go a short distance before the creepy chap steps out in the road and they nearly run him over.

“Do you think we should offer him a lift?” says the mum.

But they do. They can’t see he face and he can’t seem to speak. He then attacks the dad by stabbing him in the neck with a long dirty fingernail, causing the car to crash.

The mum wakes up in a cottage hospital, relatively unhurt and the son is fine. The dad is more seriously injured but should make a full recovery though he can’t seem to speak….. Anyway, the attacker was killed so at least they’re all safe now. She just needs to identify the body, that won’t be easy as she never saw his face but she’ll give it a go. It turns out to be rather easier than she expected as the body looks exactly like her husband……

No one makes a dead ringer joke at any point. Amateurs.

What follows is a relentless barrage of a paranoia and terror as the mum has to piece together her memories of the crash and work out which one is the attacker and which one is the man she married. 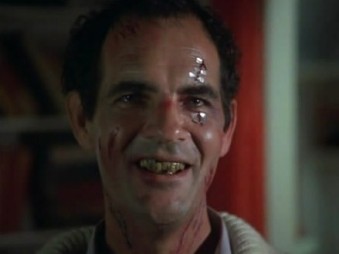 Bad teeth = poor….evil, sorry I mean evil. I always get those two mixed up. I should be a TV writer.

It’s hard to exaggerate how brilliantly grim this story is, the direction is possibly the most polished and skilful I’ve seen on TV, slick when needed and jarringly unsettling, Alan Gibson shining when given decent material to work with. The flashback sequences involving the fight between the dad and the attacker are both brutal and disturbing. If only Gibson’s Hammer films could have been more like this. 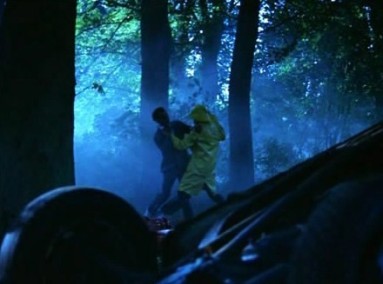 Not pictured: Dracula hanging out with the Kids.

Every authority figure seems sinister and eventually everyone’s turned against the mum but unlike a simple doppelganger explanation a la Invasion of the Body Snatchers, no closure is forthcoming and the ending raises even more questions, which could be seen as a weak cop out but to me only heightens the fear and helplessness.

I’ve belatedly come to the conclusion that short story is the best form of horror as it can get away without an explanation, and explanation only ever robs fear of its power.

And who wants that?

2 thoughts on “Foreign Countries #2: Hammer House of Horror: The House That Bled To Death/The Two Faces of Evil (1980)”