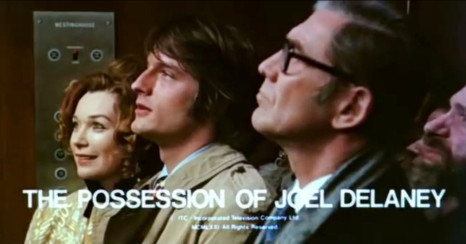 This month (February 2018) the BFI are celebrating the work of pioneering director Waris Hussein. His CV reads as a parade of some of the most groundbreaking TV series in the UK including Suffragette serial Shoulder to Shoulder (1974), Edward and Mrs Simpson (1978) and taboo-smashing Aids crisis drama Intimate Contact (1987). A success in the US too, he worked with Richard Burton and Elizabeth Taylor on Divorce His – Divorce Hers (1973) and won an Emmy for Copacabana (1985).

In short there aren’t many directors that have such a wide-ranging body of work while rising above the limitations of budget or medium to produce such a consistently high quality.

Nevertheless an ITC horror/thriller doesn’t seem an obvious vehicle for Hussein, until you remember that much horror is a useful metaphor for social commentary, and then things fall more or less into place.

Norah Benson (Shirley MacLaine) is a rich divorced mother of two, living in Upper East Side Manhattan, New York. She has an abundance of leisure time and a casual disdain for her Puerto Rican housekeeper, Veronica Chavez (Miriam Colon), yet she seemingly dotes on her two children, Peter and Carrie (David Elliott and Lisa Kohane) and even more so on her younger, liberal brother, Joel (Perry King). When Joel doesn’t show up for dinner one night, she visits his tiny apartment in Spanish Harlem and witnesses him being dragged out kicking and screaming by the Police after apparently trying to murder the caretaker.

Using her influence to get Joel released from the psychiatric hospital he’s being held in, Norah moves Joel in to her apartment and he begins having sessions with psychiatrist, Erika Lorenz (Lovelady Powell) who they know socially (because of course they do). But as Joel’s behaviour becomes more erratic and dangerous, Norah is warned that he may housing the spirit of a Puerto Rican murderer, Tonio Perez.

So is Joel really possessed or is he schizophrenic? On the one hand we have science v superstition and it’s a straightforward supernatural thriller as we wait to see if Joel can be saved before he kills his loved ones. But on the other we have something far more interesting, because the horror and the faux voodoo are mere vehicles to explore endemic poverty, racism and ignorant privilege of the white affluent classes. Immediate problems in early 70s New York.

Despite the opening of the World Trade Center (sic) 1970s New York City wasn’t the nicest place to live. The economic crises of the 1970s hit New York hard, and the movement of the middle-classes out of the city suburbs reduced tax revenues and crippled public spending. Indeed, later in the decade the Mayor of New York, Abraham Beame was close to declaring the city bankrupt. Consequently crime rates rose dramatically. The New York subway and Central Park became, if not full-on no go areas, then at least places to be avoided, and as buildings became abandoned and derelict, squatters and drug-dealers moved in. Around the same time the NYPD was being investigated for corruption.

Such a decaying setting is not merely an appropriate backdrop for such a film, it becomes an essential ingredient. The scenes where Nora visits her (now) ex housekeeper’s apartment in Spanish Harlem in a failed attempt to persuade her to return are shot through with empty arrogance. Nora can’t believe Veronica has left her unable to cope without much in the way of understanding what coping really means despite the horrific poverty evident around her. As a lesson is moral relativism it’s hardly subtle but then little is subtle in Veronica’s world, and she’s long since had the measure of Nora.

However the film doesn’t preach, nothing about Hussein’s depiction of the Puerto Ricans and their situation or activities is shown to be quaint or patronising. Similarly nothing about the white middle classes is condemned or ridiculed. You are simply shown the effects of one world encountering the other in unpleasant circumstances. This lack of signposting means the audience has to work that bit harder to decide where their sympathies lie. Of course that can involve some self-examination, something many of us are none too keen on. And it’s here that horror-as-metaphor is at its strongest, as Joel’s possession turns him into a killer so Nora’s search for an answer turns her into something else and she becomes very aware of how shallow and self-serving her world view is.

Parallels between these worlds are constantly drawn, it’s revealed that Toni and Joel were friends and may have had much in common; tribal masks and totems adorn Erika’s apartment, items of great cultural significance reduced to decorative ornamentation for the rich and privileged, Erika’s ultimate fate is entirely fitting. And it was Nora’s privilege that got Joel released from the secure psychiatric hospital in the first place. She has seeded her own destruction.

The final act is controversial, Joel traps Nora and the children in their beach house and in one decidedly shocking scene forces thirteen year old Peter to strip naked and dance. It would be unthinkable to allow that to be filmed now and is more disturbing than any number of slightly unconvincing dismembered heads seen previously.

If there’s one disappointment it’s that the final shots seem to take away the ambiguity of whether or not Joel was genuinely possessed or genuinely ill. But this a film that you suspect became something very different from how it was viewed when conceived but much more in keeping with Waris Hussein’s remarkable body of work.

One thought on “Foreign Countries #16: The Possession of Joel Delaney (1972)”