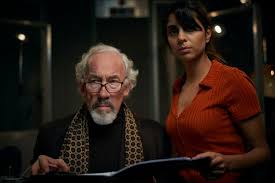 The latest effort in the on/off revival of the BBC’s A Ghost Story for Christmas turns back to another original piece by Mark Gatiss. A slightly hammy, over-the-hill actor, Aubrey Judd (Simon Callow) reads ghost stories for the radio in the style of Appointment with Fear (1943-55) and its various successors. As he reads the latest one he becomes aware that he is not alone in the ‘dead room’, the studio, and a mistake from his past has returned for its revenge.

It’s been ten years (Christ) since Gatiss’s trilogy (triptych?) Crooked House (2008) and both that and this new story take their place alongside the four most recent M.R. James adaptations; A View From A Hill (2005), Number 13 (2006), the re-imagined Oh Whistle And I’ll Come To You (2010) and Gatiss’s own The Tractate Middoth (2013) in providing an unofficial second series to Lawrence Gordon Clark’s original run of A Ghost Story for Christmas (1971-78*). That series also had a couple of original stories, Stigma (1977) by Clive Exton and John Bowen’s The Ice House (1978). While both those pieces are certainly effective, they raise questions of expectations and tone regarding ghost stories at Christmas.

As we all know, Christmas was invented by Charles Dickens in 1843 when he distilled and preserved the zeitgeist of the mid-Victorian revival of how Christmas was celebrated, and M.R. James’s tales of gothic academia and vengeful sentinels were designed for the huddled, shared intimacy of a winter celebration. Stigma is a 70s folk horror tale that on one level uses the same basic premise of James’s The Ash Tree (1975) – dead witch getting her revenge – but in doing so creates an entirely different (and very contemporary) feel, that of an ancient evil attacking the mother of an ordinary family. The Ice House is an experimental chiller that might be more at home as a Play for Today. They both sit ill with the M.R. James and Dickens adaptations that precede them.

By contrast Mark Gatiss’s original stories take pains to fit into the canon of expectation as regards the Christmas ghost story. In Crooked House Gatiss himself plays a curator who narrates two tales of terror from the past before bringing things up to date in the third episode and showing how the past can destroy your future. In The Dead Room, we have a contemporary setting and even though the haunting here is from a ghost as recent as 1976, it’s a vengeful force from the past and thus fits very well into the M.R. James archetype. Because this is an exercise in the very real way the 1970s is haunting us now (check out the 70s Play For Today style titles and a cast that includes Susan Penhaligon) Gatiss grounds this story in the rules of M.R. James because thanks to Lawrence Gordon Clark, M.R. James has become as quintessentially 70s as Doomwatch (1970-72), Ace of Wands (1970-72), Children of the Stones (1977) and pretty much anything by Bob Baker and Dave Martin. So while this isn’t an adaptation of an M.R. James story, it is essentially an adaptation of an M.R. James essay. Just to make sure things are nicely meta, Aubrey Judd makes mention of this to radio producer Tara, (Anjli Mohindra).

First published in Evening News on 17 April 1931, Ghosts – Treat Them Gently! sees James discuss the origins of his interest in ghosts as well as setting out his ground rules for a ghost story.

“Roughly speaking, the ghost should be a contemporary of the seer.”

James cites Hamlet’s father and Jacob Marley as the most famous examples. The point being that the viewer/reader must have some understanding of the world the ghost came from and its relationship to the protagonist. Too far into history and the ghost might as well be an alien, the ghost should be close enough to feel real. Here the ghost is a 20 year old man, Paul (Joshua Oakes-Rogers), a former lover of Judd’s back in the scorching hot summer of 1976, when the age of consent for homosexuals was still 21. As his fame grew so did the chance of scandal, and when Judd went to break it off, the jilted lover threatened to go to the papers. His death would be convenient…

Now the BBC broadcasting a drama about a celebrity who had sex with someone who was underage in the 70s might seem a bit on the nose but here its couched in the unfairness of legal inequalities of sexuality. People watching presumably won’t have any problem with the young man being 20, rather the fear in which so many gay people lived in the recent past.

“…there must be ordinary level—headed modern persons — Horatios — on the scene, such as the detective needs his Watson or his Hastings to play the part of the lay observer.”

Once again James uses Hamlet as the universal touchstone but with it the companions of Sherlock Holmes and Hercules Poirot (a Doctor Who companion would be another, more recent example). A character to ask the questions the viewer would, and as a Control against which to measure the journey the protagonist embarks upon. The Dead Room gives us radio producer Tara. Young, female and an obvious target for Judd to patronise, she represents the future that Judd has no part of and is thus unaffected by the haunted past manifesting in the studio.

“Setting or environment, then, is to me a principal point, and the more readily appreciable the setting is to the ordinary reader the better.”

Gone are the days when writers could use the settings of scary castles and remote monasteries to convey fear, they’re now just the stuff of cliché. James wants stories set in places you recognise, places you understand, places you could be. The Dead Room is set in a radio studio, which isn’t the most universal of venues but that’s not why this is such a crucial setting, this is the BBC’s Maida Vale studios, home to the music of the BBC since 1934. This is a place steeped in the history of Mark Gatiss’s childhood. It’s where Delia Derbyshire created the Doctor Who theme tune, the home of the John Peel sessions, it’s where Bing Crosby made his last recording, three days before his death. And it’s due to close its doors very soon. This is a place that’s full of ghosts.

Comparisons could be drawn here with Berberian Sound Studio (Peter Strickland, 2012) but they are very different beasts: Berberian Sound Studio is a giallo film about watching a man watching a giallo film being made. Here Judd is haunted by his personal past, and while he’s busy railing against how things aren’t as good as they used to be (he has to read a ghost story about online gaming, he’s not happy), 1976 turns up and kills him, in a place where so much of 1970s British culture was soundtracked. Gatiss however does have fun with the character of the Foley artist, Joan (Susan Penhaligon), making her a wordless and unknowable presence for Judd and a pleasant regular colleague for Tara.

“Our ghost should make himself felt by gradual stirrings diffusing an atmosphere of uneasiness before the final flash or stab of horror.”

We see flashes of a figure in the distance, words change inexplicably in a script and there’s a song, S-S-S-Single Bed by Fox. None of the other characters experience this and there is a possibility that the whole thing is taking place in Judd’s head. The ghost has no connection to the building, and it’s Judd himself that’s being haunted.

The “final flash or stab of horror” (or Jamesian wallop as the chaps at A Podcast to the Curious have termed it) comes at the very end, lit only by the light of Judd’s iPhone, the drowned lover returns, bloated, eyeless and black, to have his revenge. Whether or not he exists outside of Judd’s head doesn’t really matter, he haunts Judd and we experience the horror with him. But with the decision to screen this on BBC Four rather than BBC Two (like 2013’s offering of The Tractate Middoth), with its self-selecting Certain Type of Viewer comes a potentially dangerous increase in the percentage of people watching the ending and going “he’s just nicked that from Tales from the Crypt.”

But for all Gatiss’s obvious influences from 70s British TV weirdness and Hammer Horror it’s short Irish Film A Child’s Voice (1978) – starring TP McKenna, written by David Thompson and directed by Kieran Hickey – that would seem to cast the biggest shadow. Both feature slightly over the top actors reading ghost stories for the radio, both concern the actor being haunted by something their respective producers are unaware of, and thus both feel the true fear of isolation. But while A Child’s Voice is a historical piece that uses the advent of mass depersonalised communication of radio and telephone (i.e. the future) as a conduit for the fear, with The Dead Room it’s the past returning to destroy.

The Dead Room is well structured and benefits from a looser directorial touch from Gatiss, jarring close ups vie with an impressive depth of field for such a confined production. Plenty of Easter Eggs for the seasoned cult fan, and a lovely Tom Baker “whippet shit” reference.** But it can’t disguise the fact that it isn’t all that scary, and the build-up of atmosphere doesn’t quite hit the mark, although the final scene works well. But this is a tale with a message wider than the confines of Maida Vale studios and one man’s guilt.

This is a haunted story about a haunted man in a haunted building. Disdainful of the present, he longs for the past and in doing so destroys his future. Mark Gatiss shows that everyone watching this programme on Christmas Eve does so in a haunted country.

**This is allegedly how former Doctor Who Tom Baker described Terrance Dicks’s script for Horror of Fang Rock (1977). Interestingly (sic) that script was a late replacement for The Vampire Mutations, which the BBC decided might detract from their high profile adaptation, Count Dracula (1977), which features Susan Penhaligon, who’s in The Dead Room. WHO’S THE REAL GHOST HERE?