This is the first in an occasional series of posts where I’ll cover common themes on television around a particular time, starting here with the ever popular Pagan Village Conspiracy.

If the Brexit vote taught us anything, it was that the ignored and the dismissed do not go away, and they will take any opportunity to remind the smug, liberal elites they feel ostracised and patronised by that they are here and they will not change.

The television landscape of the early 70s become an outlet for the social conflict of the new order of the Baby Boomers and an increasingly beleaguered Establishment with strained industrial relations and both church and state facing a less deferential population. At around the same time the folk music revival had brought Britain’s mythological past (or imagined variations thereof) into the mainstream and musicians such as Bert Jansch were every bit as influential as Mick Jagger.

These factors played their part in the birth of what is now termed Folk Horror, and TV anthology series made useful places to explore such territory and a common theme emerged of the urbanite arriving in a rural idyll only to be manipulated as the focus for some ancient rite, usually concerning fertility and rebirth.

Robin Redbreast started life as a standalone drama before finding a home in the first season of BBC1’s flagship anthology series Play for Today. Recently single TV script editor1, Nora (Anna Cropper) does up a place in the country and takes an extended holiday. Thanks to the guiding actions of the locals she meets and is impregnated by the very fit and very ignorant Edgar, (Andy Bradford)2, known to the villagers as Robin Redbreast, an unwitting sacrificial lamb who must pass on his seed before dying.

While this can be seen as an exercise in exploring what it means to be civilised, writer John Bowen takes time to establish that Nora’s London life is hollow, her only friends seem to be a rather superficial, cynical couple (Amanda Walker and Julian Holloway). She has material wealth but nothing meaningful. Yet in the village she has significant meaning, she is valued, protected. Controlled at every turn and terrified she may be but she is wanted. That, for me, is the most chilling aspect of this production.

Doctor Who isn’t an anthology series, but is rather close to one. Little connects the series of serials that the original run (1963-89) produced save the Doctor and his companions, flitting between alien worlds of the future one week and Earth’s history the next. However for the start of the 70s new Doctor Jon Pertwee would be exiled to earth and the TARDIS sidelined, a move designed by Producer Derrick Sherwin to focus the budget and produce something more akin to the various ITC film series so popular on ITV.

With a shit car.

The Dæmons, coming at the end of Pertwee’s second series as the Doctor doesn’t feature as much as a glimpse of the TARDIS. Instead the role of the Doctor as a scientific advisor to UNIT has been established and the character of The Master (Roger Delgado), the Doctor’s equal and opposite has been introduced.

Like all long running series, Doctor Who‘s output reflects the time of its production so this was a perfect time to feature the Doctor trying to stop an ancient barrow being opened in the village of Devil’s End before coming up against the actual Devil (spoiler, it’s an alien and its appearance is the reason the Christian devil is depicted as he is).

The Doctor of course is firm in his belief in science over magic but the character of the local white witch, Miss Hawthorne (Damaris Hayman) is not put up for ridicule. Director Christopher Barry wanted someone older and battier but Barry Letts, Sherwin’s replacement as Producer overruled him. Indeed she convincingly argues that magic is just the alien Dæmons’ ‘psionics’ by another name. 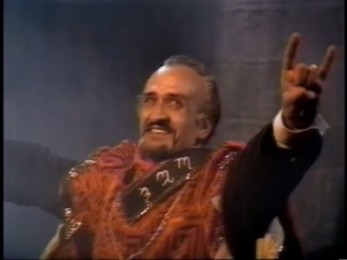 The Dæmons have all the good music.

The Master’s pretending to be the local vicar while secretly leading a local cult of devil worshippers and misquoting Aleister Crowley, so here we have the opposite situation to Robin Redbreast, the outsider is manipulating the locals. In fact we have a few outsiders in, er town. Not only the Doctor, UNIT and the Master we have Professor Horner (Robin Wentworth)3 and a BBC film crew here for an archaeological dig. Now if The Dæmons wasn’t a Doctor Who story Professor Horner may well have been our main character, trying to open a barrow in the face of Miss Hawthorn’s opposition. As it is, Horner’s dead before the closing credits on Episode 1 and the Doctor is centre stage. As a recurring character, and as a programme for younger viewers than the other two stories under examination, the Doctor provides a rock of stability for the viewer to explore the hostile village with its possessed policemen, sinister Morris Dancers, walking grotesques and corrupted church.

The sometimes uneasy relationship with the Christian festivals and their Pagan roots is at the heart of much of this type of drama. The church in Robin Redbreast is barely glimpsed, assessed only through still photographs, that concentrate far more on the offerings than any Christian symbols, and the bland voice over of the bussed-in vicar. De facto head villager Fisher (Bernard Hepton) is dismissive of the Clergyman sent to do their Harvest Festival with the implication that the locals are better placed to do what’s needed. The Dæmons sees the church destroyed and the only festival given any prominence is a Pagan one, Beltane. The final shot of the Doctor doing a fertility dance around a Maypole in sight of a recently destroyed church is a surprisingly powerful symbol for Doctor Who.

The village church is nowhere to been seen at all in the Thriller episode A Place to Die. The Avengers creator Brian Clemens clearly made the series with one eye on the US market and most episodes deal with odd goings on in the English Home Counties. In this one a new doctor (Bryan Marshall) moves into a village with his young American wife (Alexandra Hay) who the villagers seem to take a shine to. “Moon pale and moon gold” is how they describe her. She’s hurt her foot so has a bandage on her ankle, as seemingly do rather a lot of villagers……. Still, they’re all very nice to her and will do anything to help, especially the mute Nick (John Moreno). And they’re all looking forward to Lady Day.

I guess she’s asked him about the plot.

It’s very much rural horror by numbers this, and one that removes any sense of mystery both with its title and its flash forwards  opening of a girl (Sally Stephens) being murdered in the woods. You’re left getting impatient for the villagers to show their hand and their attempts to build suspense by revealing the fate of the old doctor fall flat. Indeed, the presence of Arnold Ridley and Harold Bennett among the villagers proved a welcome distraction as I imagined how this might work as a Dad’s Army spinoff.

It’s tempting to see all this as channelling The Wicker Man (Robin Hardy, 1973) but this was broadcast in May 1973, a good five months before that film’s limited theatrical release. If anything it’s more akin to Stella Gibbons’ novel Cold Comfort Farm with knowing winks to the expectant audience about what’s coming up. Maybe it played better to an American audience.

The nature of the villagers’ motivation is also unclear. They seem to be devil worshippers but the wife discovers a cross and garlic which works on a least one of them, are they vampires too? They’ve certainly all got one cloven hoof but this is hurriedly explained away as an inherited genetic defect at the very end of the story. This lack of subtlety isn’t helped by the lack of info provided about the newcomers. Robin Redbreast takes pains to show where Nora has come from and the ambiguity about the quality of her ‘civilised’ life is one of the story’s strengths. The Dæmons has both recurring heroes and a villain to cling to but in A Place to Die we’re presented with unknown innocents to the slaughter and the question becomes less about ‘will they get away?’ and more ‘do we even care?’. By making them a young doctor and a glamorous wife are we setting them up above us so we can watch them fall? Again, it would be interesting to compare audience reactions from either side of the Atlantic.

In the midst of the ‘progressive’ outsiders all three villagers have prominent roles for middle-aged women. In the case of Robin Redbreast4 and A Place to Die they’re housekeepers to the new arrivals, working in their homes to guide them in their unwitting roles, and acting as the viewers’ focal point. In The Dæmons it’s the local white witch, and unlike the other two, Miss Hawthorne is apart from the villagers. They tolerate but mock her and like so many witches before her, she is feared and respected in equal measure.

Ultimately these type of stories say as much about the attitudes of writers to the rural population of England as they do about the hidden horrors that lurked either side of the M1, and we’re never far from a Walter Gabriel sterotype. Yet if you can look beyond these prejudicial shorthands, the layered tension and off screen implications of Robin Redbreast are truly terrifying. The Dæmons however is a children’s show playing in someone else’s back yard and not quite pulling it off. When Doctor Who tried this sort thing again in stories such as Pyramids of Mars (1975) or Image of the Fendahl (1977) it would be with ancient mythology rather than current religion, or as a tighter, simpler story with fewer characters in The Awakening (1984). A Place to Die would work better (or at all) if they’d had the guts to make it a comedy. As it is it plays like someone trying to recreate the feel of Robin Redbreast without either the skill or the inclination, which is odd because although it wasn’t written by Brian Clemens he was all over the story and has significant form in this field with films such as And Soon the Darkness (Robert Fuest, 1970).

In recent times, as interest in folk/rural horror has revived, these tales from over 40 years ago carry their own sense of nostalga and are as every bit as interesting and problematic as the characters they depict.

1 Writer John Bowen disliked the role of script editors so the choice of Nora’s profession is telling.
2 Known primarily for his stunt work, you will have seen (or glimpsed) Andy Bradford flying, crashing, diving in pretty much everything from Star Wars to Downton Abbey.
3 The Actor also appears in Robin Redbreast as Wellbeloved.
4, Actress Freda Bamford would recreate this role in another John Bowen authored Play For Today, A Photograph (1977).